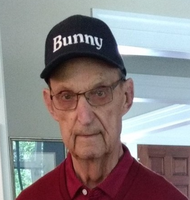 Emil F. "Bunny" Lucas, 90, of United, passed away peacefully Wednesday, September 30, 2020. He was born April 20, 1930 and was the son of the late Joseph and Mary (Bankovich) Lucas. In addition to his parents, Emil was preceded in death by his beloved wife of 64 years, Lois (Polcha) Lucas, as well as brothers, John, Joseph, Walter, Edward and Eugene and sisters, Mary, Eleanor and Margaret. He is survived by his brother Bernard. He was a loving father to three daughters, Janice (Scott) Meikle, Louise (Skip) Cernuto and Mary Ellen (Dave) Sebek; six grandchildren, Allison (Jason) Willis, Scott (Christine) Meikle, Drs. Daniel (Erin) Meikle, Emily (AJ) Shuster, Major Craig (Valarie) Sebek USMC, and Jill (Josh) Corcoran; and 10 great-grandchildren, Grayson and Dane Willis, Colton and Ella Meikle, Anthony and Ethan Shuster, Kalie, Abby and Mason Sebek, and Maddy Corcoran. Emil was a lifetime member of St. Florian Catholic Church and The United Slovak Social Club, where he served as president for many years. He also played golf in both the United Club and Senior Golf Leagues. Uniquely, he recorded a hole-in-one on the 9th Hole, a Par 4, at Norvelt Golf Club. Emil loved all sports and was one of the founding officers of the Mt Pleasant Area Junior Football League. He also enjoyed listening to polkas on Saturday and Sunday mornings, was an avid Notre Dame Fighting Irish fan and loved sports trivia with family and friends. Prior to his retirement, he was employed by Overly Manufacturing Co. Family and friends will be received from 4 to 8 p.m. Friday in the JAY A. HOFFER FUNERAL HOME, Norvelt. His funeral Mass will be 10 a.m. Saturday in St. Florian Church with the Rev. John A Sedlak as celebrant. Please go directly to the church. Privately he will be laid to rest in St. Florian Cemetery. In lieu of flowers, memorial donations may be made in honor of Emil to St. Florian Church, P.O. Box 187, United PA 15689. All guidelines mandated by the governor of the state of Pennsylvania will be followed. Everyone must wear a mask, 25 people permitted in the building at a time and social distancing is required.