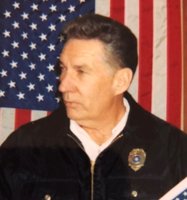 James P. Santmyer, 78 of Mt. Pleasant, passed away peacefully November 26, 2020 with his family by his side. Born September 18, 1942 in Mt. Pleasant, he was the son of the late James and Mary Jane (Echard) Santmyer. Jim leaves behind his beloved wife of 51 years, Diane. He is also survived by his two sons, Jason and Craig (Abigail), his sister Mary Jane “Janie” Reese (Barry), 2 grandchildren Charlotte and Michael, and numerous nieces and nephews. He was a loving, caring, and devoted husband, father, and grandfather, who was loved by many and will be sadly missed. Jim dedicated over 30 years of his life protecting and serving the public as a police officer. He graduated from the Indiana University of Pennsylvania Police Academy in 1980. After 25 years as chief of police for Southwest Greensburg, he retired from that role and finished out his career in his hometown as a Mt. Pleasant police officer. He was an active member of the National Fraternal Order of Police - Allegheny Valley Lodge #39, American Legion Post #44, the Slovak American Beneficial & Sportmen’s club, and the NRA. Jim was an avid, lifelong weightlifter, achieving impressive accomplishments of a 420+ bench press and an almost 300-lb. military press. He combined his love of weight training and passion for helping people to teach weightlifting for 10 years at the Scottdale YMCA. Jim was an avid hunter and shooter from his early youth throughout his entire life, becoming a marksman with both handguns and rifles. He received Class Marksman in the police academy, and his marksmanship was repeatedly displayed during annual police firearm qualifications, where she shot many perfect scores and near-perfect scores. Jim is also a veteran of the Pennsylvania Army National Guard, where he pursued advanced infantry training, and was activated multiple times stateside. He fought a courageous battle with Parkinson’s Disease. In lieu of flowers and in the spirit of Jim’s passion for helping people, memorial donations may be made to the Parkinson’s Foundation via the Facebook Page entitled – James Santmyer Parkinson’s Memorial Fundraiser, or directly to www.parkinson.org. Jim attended Bridgeport United Methodist Church on Bridgeport Rd. in Mt. Pleasant, PA. A private, family service will be held there on Sunday, 11/29 at 2pm. Due to COVID19, a memorial gathering will be held in the Summer.