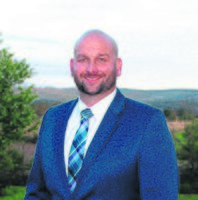 Mike Reese, 42, of Mt. Pleasant passed away peacefully with his family by his side on January 2, 2021 at Excela Health in Greensburg. Mike was born March 7, 1978, son of Joan Yothers Reese of Brinkerton, and Randy Reese of Hempfield. Mike was preceded in death by his maternal grandparents Anna and Lloyd Yothers; his paternal grandparents Robert and Delores Reese and his Aunt, Colleen Yothers. Mike was a graduate of Mt. Pleasant High School. He continued his academic and athletic career at Duquesne University, where he played football and earned his Bachelors in Education. He then went on to obtain his MBA from Seton Hill University. Mike was a lifetime member of St. Florian Church and was a member of the Mt. Pleasant Lions Club and was an integral part of the Mt. Pleasant Little League and Jr. Football Programs. Mike was a six term Republican member of the State House for the 59th District of Pennsylvania. He was first elected in 2008 and most recently re-elected November 3rd. He ascended into leadership roles to serve as the Republican Caucus Secretary in 2019-2020 and was elected to serve as Republican Caucus Chairman in the 2020-2021 session. Prior to his leadership roles , Mike served on various house committees including Education, Children and Youth Services, PIAA Oversight, Consumer Affairs, Rules and Liquor. Mike was a tireless advocate for the Youth of Pennsylvania. He recently authored HB2787, which was aimed at giving school boards the authority to decide what was best for their students with regards to sports and extracurricular activities. Above all else, the most important thing to Mike was his family. He participated in every aspect of his children’s lives. He was their coach, their mentor, and their guiding light. Some of Mike’s most cherished moments were the trips with his entire family to Disney, to the beach and various historical sites, or simply just hanging out at the pool or the bonfire. Mike is survived by his loving wife Angela and their children Addison, Michael and Claire; his mother Joan Yothers Reese; his father, Randy Reese (Christine), his siblings Kara Reese (Jerry Hornyak), David Reese (Amanda), Brandon Reese (Erica) and Christopher Reese; his nieces and nephews, Cody, Morgan, Emma, Jacob, Beau, Matthew, Jack, Louis, Ellie, Griffin and Ian. Mike was loved by many and was truly one of a kind. He was our family’s shining star, our moral compass, our leader. His impact on our lives and the lives of so many others is immeasurable. Even in death, Mike helped others as an organ donor. He will live in our hearts forever. Friends and Family will be received at Jay A. Hoffer Funeral Home, Norvelt on Wed, Jan 6th from 6 to 8 pm and Thursday Jan 7th 2 to 4 pm and 6 to 8 pm. Following the pandemic guidelines, face masks must be worn and a limited number of people will be allowed in the building at one time. The funeral will be private. In lieu of flowers, donations can be made to St. Florian Church.